If I were to ask you what some of your wildest dreams are, could you answer? When was the last time you gave them any thought or attention?  If it has been a while, why?

Due to an incredibly difficult and serious burden put on my life a couple months ago, I have decided to reassess my life, my past choices, and where I am headed.  The nature of this burden is one that forces a person to face mistakes and at a high cost.  For me, part of facing mistakes is to learn from them, and do better.  I have been inspired and motivated in a very practical, real, and crazy way and I am excited!  I am soaking up words of advice, podcasts, sermons, and books to feed this drive within me. I will speak more about the burden, and the mistakes, and the goals at another time but this post is about some advice that was given to me recently that I desperately needed, although at the time I didn’t realize it.  The advice was very straightforward, and quite possibly even obvious to most people. But for me, it changed everything.

“Create a path to your goal and do not veer off that path.  It will get hard, but do not give up, keep on the path,” (a professor of mine whom I respect tremendously gave me this gold a couple weeks ago).  Thank you, Chuck. I have not been able to stop thinking about not only this advice, but what my goals are and what paths I should consider taking to get there, weighing in my head every night which path makes the most sense and will set me up for the most success.

Around the same time, I had a phone conversation with one of my best friends whom has recently moved 3000 miles away from me.

(Yes, another good friend very far away.  That story, and those feelings I will also save for another post).  She suggested a podcast to me, which then led me to a book called “The Last Arrow” by Erwin McMannus.  I am only two chapters in, but I am already changed.  My friend still has no idea how imperative this man’s wisdom is to my drive.  If you have goals, and dreams, it might behoove you to check this book out.  It will light a fire under your butt.

A few things have stood out to me these last couple weeks, some from the book, some from the advice I was given by Chuck, and I wanted to talk a little bit about some of those thoughts because I hope that you can also be inspired and pushed! For me, it has been so healthy and uplifting, I hope for you my words can be as well.

One of the main points that has been driven home for me through all this discovery is that we must move forward as if we have nothing to lose and with no intention of turning back, or in other words, we must go beyond the point of no return.  You see, right now for me I have my “eyes on the prize” and if I am honest, I am realizing how much I have settled in recent years on what that prize(s) is! I believe that the desires deep within us that we simply cannot shake, no matter what we do or how we try, are literally engrained in our DNA and we should not stop and be satisfied for less.  Some might even say that God put those desires there, and that He purposed us to live those dreams.  I am convinced more than ever that settling is not okay.  It is a disservice to ourselves, to humanity, and for me, to my God, to settle on anything less.

Erwin McMannus talks in his book about not saving anything for a next life, about pushing as hard and as far as possible in this life to try to reach those goals and desires.  Don’t hold back!

This also makes me think back to a sermon I heard in Hawaii from a stellar dude.  He spoke about a story that we see in John chapter 5.  Let me set the scene.  There was a sick man who laid by the city fountain for 38 years, lame and with no healing in sight.  He lay on a mat.  Now in those times, the mat was probably one of his only possessions, it symbolized his “work” (as a beggar), and it also held his place so that others couldn’t take it (which was possibly a good place to do his “work”).  So, his mat, and where it lay, was important.  When Jesus saw him, he healed the lame man and he told him to stand, pick up his mat, and walk.  If we can ignore the miracle of instantaneous healing for a second, the part of this story that is speaking to me right now is that Jesus says to the man, who was previously lame, to STAND, PICK UP HIS MAT, AND WALK.  Wow.  Talk about a future change.  Not only has the lame man’s future changed from paralyzed limbs to ability to walk but Jesus tells him to pick up his mat, which means DON’T LEAVE ANYTHING BEHIND, DON’T LOOK BACK.  How many times do we see the dream, and start moving toward it, but leave our mats behind, as if to say, “I may be back someday and need this again,” or in other words “I am afraid of failure and giving up is an option”.

No, its not.  If you want to succeed, i’s not.  You cannot walk forward with fear of failing. 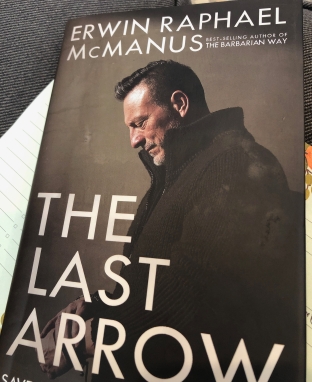 Erwin McMannus also says, “We can become so afraid of death that we never live, so afraid of failure that we never take risk, and so afraid of pain that we never discover how strong we really are.”  Wow does this speak to me.  Not only have I realized where I have settled on my dreams and desires, but how much I have let fear keep me from them as well.

I had a conversation with my husband recently about what I believe the difference is between someone who succeeds at their life’s goals and dreams, and someone who settles or is living less than.  I believe one of the big differences is desire.  The one who succeeds just wants it more! They want to live their best life more, they want to succeed at their goals more, they are driven, and they won’t settle.  They understand that in order to succeed they cannot be afraid of failure.  The fear of failure must not outweigh the desire for greatness.  They push forward, past the point of no return.

I know for me, regarding the path that I am about to step onto, failure isn’t an option.  I literally am choosing to believe that it is impossible to fail.  And I am choosing to hold nothing back, I am going to pick up my mat, give it my all, and refuse to look back as if back is an option.

The dreams I have are big, and to some they may seem impossible, and even for my life they are going to break molds.  But I have resolved to push forward and work.